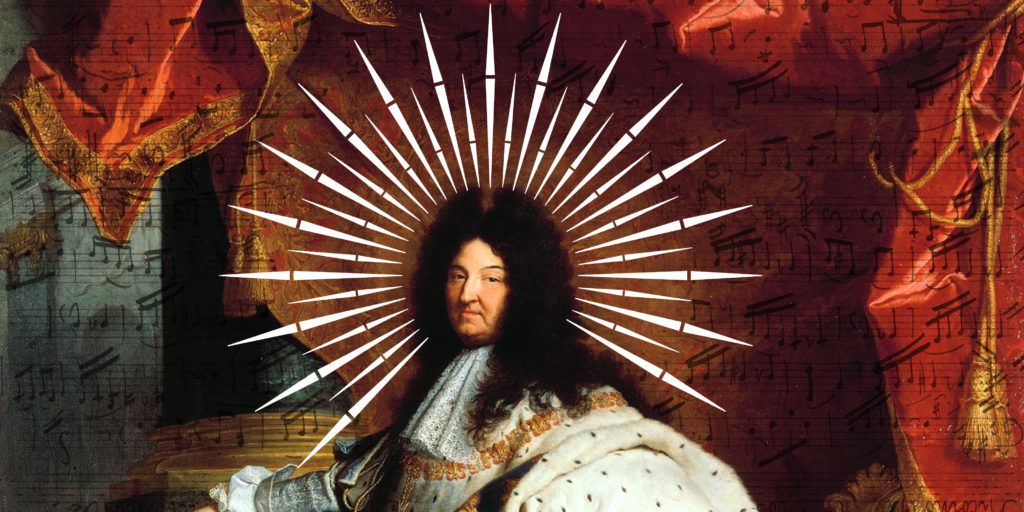 On this day in 1682, Louis XIV moved the French court and government to Versailles. The future French king had first visited the property to escape a smallpox epidemic when he was three years old, and over the course of his life he transformed the once-humble hunting lodge into a palace, unprecedented in its extravagance and a symbol of total monarchy that would eventually topple during the French Revolution.

It wasn’t only architectural excellence that Louis XIV was interested in; he was also a fervent art enthusiast. Robert M. Isherwood, who was a professor of history at Vanderbilt University for nearly 30 years and the author of Music in the Service of the King: France in the Seventeenth Century, wrote this about Louis XIV’s artistic interests:

The king earnestly wanted his reign to be famous for its artistic brilliance, and he believed that musicians, poets, painters, sculptors, and architects could preserve his great deeds for posterity. Louis aspired not only to surpass the achievements of classical antiquity but to establish France’s artistic supremacy in Europe.

During Louis XIV’s record 72-year reign, music flourished at Versailles. Hear some of that music below, and should you feel so inclined, take a virtual tour of the palace and several online exhibitions as you listen. Brought from Florence to Paris as a young boy to help a French noblewoman perfect her Italian, Jean-Baptiste Lully first met a young Louis XIV when the two danced together in a ballet. They forged friendship that would result in Lully spending most of his life working as Master of the King’s Music. Considered the father of French opera, Lully composed Persée the same year Louis XIV moved to Versailles.

The opera was re-created nearly a century later in 1770 when Louis XV completed the palace’s Royal Opera Hall — a venue his great-grandfather never finished. At the time, it was the largest concert hall in Europe, and Lully’s opera would mark both its inauguration and the marriage of the Dauphin (the future Louis XVI) to Marie Antoinette. The lavish performances included a 95-voice choir, 15 soloists, 80 dancers, 100 extras, 80 instrumentalists, five sets, and 530 costumes.

Watch Lully expert Hervé Niquet and the ensemble Concert Spirituel recreate the music for a 2016 recording: Jacquet de La Guerre earned the nickname “la petite merveille” (the small wonder) after appearing as five-year-old prodigy at the court of Louis XIV, singing and playing harpsichord. After regular appearances, she was accepted into the French court as a teenager, where Madame de Montespan, one of Louis’s mistresses, oversaw her musical education.

She composed some of her first pieces at Versailles, spending a few years there before marrying organist Marin de la Guerre in 1684 and moving back to Paris. There, she taught lessons, composed, and performed concerts to great acclaim.

Below, the Bach Players perform her Sonata in D minor for violin, viola da gamba, and harpsichord:

In June of 1710, Louis XIV’s final building project at Versailles—a chapel complete with a brand new organ— was consecrated. The organ was inaugurated that same day by François Couperin, who at the time was one of four court organists and harpsichord teacher to the royal children.

And promotions soon followed: in 1713 he was given a 20-year royal privilege to publish, resulting in several volumes of keyboard works and chamber music, and in 1717 he was named court harpsichordist. While he’s best known for his harpsichord music, Couperin also penned notable chamber works, including the Concerts royaux he composed for the king’s Sunday evening entertainments: Charpentier’s way into Louis XIV’s court wasn’t easy, thanks to a rivalry with leading royal composer Jean-Baptiste Lully. Charpentier’s patroness, the influential Mademoiselle Marie de Lorraine, Duchess of Guise, introduced him into French high society. Eventually, his music caught the ear of of the King, which sparked the jealously of Lully, who did his best to ensure that Charpentier would never get a royal appointment.

Beyond that, Lully’s royal privilege essentially granted him a monopoly on staging large-scale opera in France, so Charpentier turned his focus to sacred vocal music, composing for the Jesuits, and staging the occasional chamber opera in the home of his patroness. Eventually he earned several royal positions: Master of Music at the Sainte-Chapelle, the king’s private chapel in Paris, and composer for the private masses of the Dauphin, the king’s eldest son.

While in this position, Charpentier snuck in a few of his operas at court, including one that must have been flattering to his patrons: The Pleasures of Versailles. In it, the characters represent the many indulgences that were abundant at the palace, including music, conversation, and gambling. A contest in 1683 brought Delalande to the court of Louis XIV. The king had asked 15 composers to set the words of the psalm “Beati quorum,” and Delalande’s success marked the beginning of his 40 years in service at the court. As one of the king’s favorite musicians, Delalande worked as a composer, organist, and music teacher for the royal daughters.

He’s mostly known for writing grand motets, a sacred genre that made use of large choirs and an orchestra, and Symphonies pour les Soupers du Roy, music written to accompany the king’s meals—which were, like most things associated with Louis XIV, a grand public spectacle.

A student of Lully and a virtuoso on the viola da gamba, Marin Marais was hired as a court musician in 1676 and was shortly thereafter promoted to Violist for the King, a position he held until his retirement in 1725. He is, of course, remembered for his hundreds of composition for various instruments of the viol family, but he also composed several operas at the encouragement of his teacher.

Marais often gave his pieces descriptive, colorful titles, and sometimes penned programmatic music— one memorable example being Tableau de l’Opération de la Taille, an artistic depiction of a risky surgery he endured at age 64 to remove a stone from his bladder.

Tune in to 91Classical all day today to hear music from King Louis XIV’s court at Versailles.