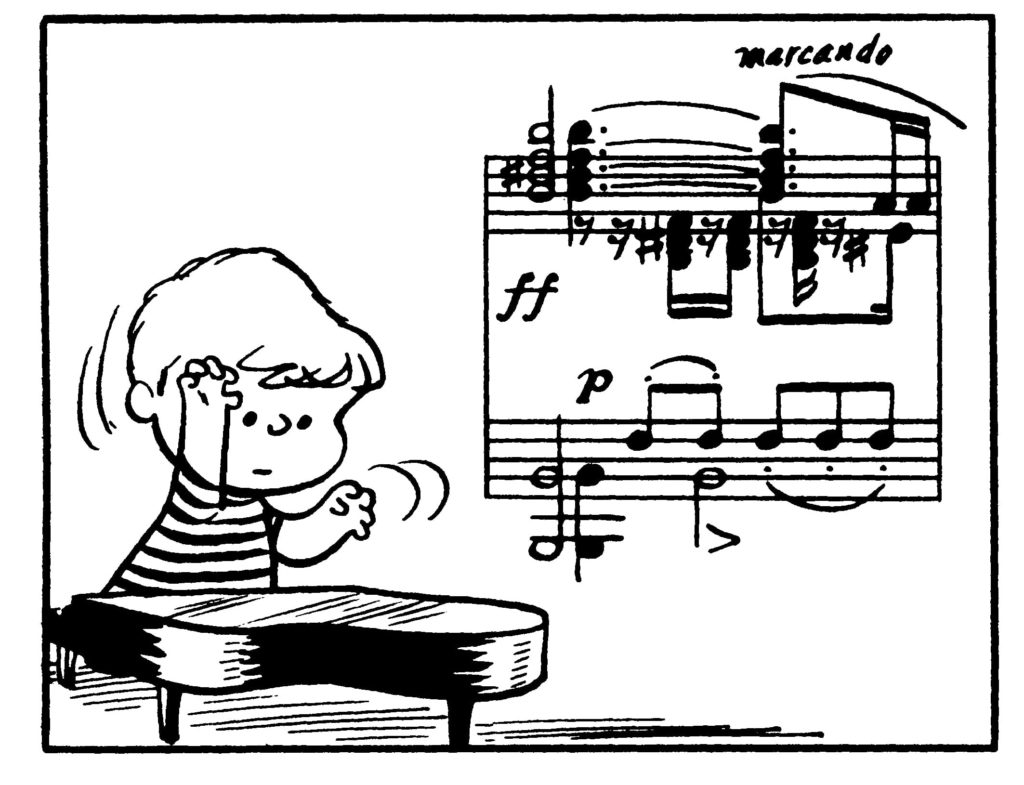 For five decades, a familiar sight greeted readers of the comics section of the newspaper: Schroeder at his toy baby grand piano, with Lucy leaning backward against it. Overhead, sheet music played an active role in the story. With overwhelming majority, the music was by one composer: Ludwig van Beethoven.

Schroeder first appeared as a baby in the comic strip Peanuts in 1951. Initially, there was no specific reference to music, outside of his house number matching Beethoven’s birth year of 1770. But after watching his daughter enjoy her toy piano, artist Charles Schulz decided to incorporate one into the story. Charlie Brown gamely attempted to show Schroeder how to play. But when Schroeder sat down at the instrument, he was already a prodigy—playing music by Rachmaninoff.

We know that Schroeder played Rachmaninoff because Schulz drew the sheet music into the comic itself— a striking bit of visual realism in a comic featuring the imagination of children. Schulz took the drawings quite seriously, hoping that readers would take the time to figure out exactly what Schroeder was playing.

Schulz was a well-known classical music fan, attending concerts regularly. According to his widow Jean Schulz, he could sit remarkably still for the entire show, rarely even fidgeting at all. He attributed his love of music to working at an art school, where fellow students who were studying music helped him amass an impressive record collection.

Schulz did not read music, he simply bought a few scores and copied sections of the music into the comics very carefully. In a 1994 interview he described the importance of this authenticity, crediting it with the publication of his first book after the publisher noticed Beethoven’s music.

“So when I do things about medicine, or historical things from World War I… it’s all very authentic. I think it’s important to try to break beneath the surface in everything you are doing, rather than just drawing surface cartoons,”  Schulz said.

Interestingly, his favorite composer wasn’t Beethoven at all— it was Johannes Brahms. But, Schulz knew the comic value of a character like Beethoven.

Schroeder was not the first to endeavor to play Beethoven’s music in the comic strip. Charlie Brown, who frequently picked up and experimented with various musical instruments, makes a valiant attempt at Beethoven on the violin. Eventually, he stops after he has a dream in which Beethoven strangles him.

But it was Schroeder’s love of the composer— and his devotion to Beethoven’s music and legacy— that became iconic and inseparable from his character. Not long after Schroeder appears, Charlie Brown drags a heavy box into the room, and delivers to the young pianist a bust of Beethoven. This moment could be pinpointed as the start of Schroeder’s true fanaticism for the composer.

Eventually Schroeder’s devotion to Beethoven was given a different foil: Lucy van Pelt.

Lucy, to put it simply, is a tough girl. She is often labeled a bully, especially given how she constantly tricks Charlie Brown into attempting to kick a football by pulling it away at the last second so Charlie Brown can fall on his bottom. But before she picks up the football, Lucy is teased for wanting to play a sport. Her attitudes toward other children, capitalism, and even Beethoven, are the result of how she’s been treated by others. But when she first meets Schroeder she asks what he’s playing on the piano. When he answers nicely, she is immediately smitten and craves his attention.

From that moment on, Lucy never stops trying to impress Schroeder. For decades in the strip, as the characters do not age a bit, Lucy leans on the piano as Schroeder plays. She asks him questions constantly as he’s trying to practice, setting up scenes that are both sweet and often silly. These questions lead to Schroeder using his seat behind the piano as a soapbox, often pounding the keys, yelling that music is about art, and not making money. He rarely gives in to her loving gaze, and Lucy is never deterred.

The world of the Peanuts gang was, as Schulz described, “a whole world going on in the playground that adults had no clue about.” The simple truths are not always cheerful, and in fact, many of the comics deal with disappointment. Charlie Brown is never really noticed by the Little Red Haired Girl, The Great Pumpkin never arrives in Linus’s truly sincere pumpkin patch, Sally never gets her kiss from Linus, and the baseball team never wins a game. But Schroeder? Schroeder is never let down by Beethoven.

Occasionally frustrated by his friends’ lack of appreciation, often confounded by Lucy’s attentions, and generally miffed at the “commercialization” of music, Schroeder has the refuge of that magical toy piano that can play all 88 keys. While Charlie Brown can frequently get knocked down and stay there, perseverance is the territory of Schroeder. Always practicing. Always coming back to the instrument and the music.

Schroeder’s musical dedication was the source of all kinds of gags over the years, with characters interacting with the sheet music, a closet full of replacement pianos (and Beethoven busts), and even references to the fact that Schroeder plays very complex repertoire on a tiny child-size piano. Occasionally, it even allowed Schulz to poke fun at other genres of music. Surprisingly, given the Peanuts television specials’ now iconic soundtracks, Schulz was not a fan of jazz.

According to Jean Schulz, Charles used to claim that each character contained a little bit of his personality. So what was Schroeder, and thus Beethoven, in Schulz?

Charles Schulz was a man who lived to work. Bits of his life were interspersed into the comic strip. Awards he would win, friends he would meet, and details from his children’s life were all winked at by his drawn characters. Schulz came from a family of Norwegian farmers, who didn’t exactly understand the work of drawing. One can imagine him hitting his drawing table like Linus at the piano, yelling “ART!”

Schulz processed many of his complicated feelings on the funny pages. Bouts of depression (as he preferred to call it, “melancholy”), frustration with his first marriage, and memories of playground disputes can all be found in Peanuts if you look for them.

As an artist like Schroeder, and like we imagine our historical Beethoven, Schulz had a place to find comfort. A pivotal scene near the end of television special A Boy Named Charlie Brown illustrates that art of any kind can be a refuge of depth and great meaning. In it, Schroeder (in a performance by seldom-recorded composer Ingolf Dahl) performs the second movement of Beethoven’s Sonata Pathetique. The piece accompanies an almost psychedelic dream sequence full of Gothic figures and religious symbols.

Listen to that music below, performed by Claudio Arrau. In your quiet moment, you can pay tribute to Schulz, Schroeder, or Beethoven. You can picture Gothic churches and statues of gargoyles and angels, or a sincere pumpkin patch, waiting in the dewy evening with Linus. Or for its own sake, as Schroeder might say: “ART!”